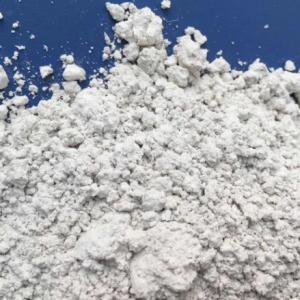 Calcium Oxide/ quicklime Use:Light: When quicklime is heated to 2,400 °C (4,350 °F), it emits an intense glow. This form of illumination is known as a limelight, and was used broadly in theatrical productions before the invention of electric lighting.Cement: Calcium oxide is a key ingredient for the process of making cement.As a cheap and widely available alkali. About 50% of the total quicklime production is converted to calcium hydroxide before use. Both quick- and hydrated lime are used in the treatment of drinking water.Petroleum industry: Water detection pastes contain a mix of calcium oxide and phenolphthalein. Should this paste come into contact with water in a fuel storage tank, the CaO reacts with the water to form calcium hydroxide. Calcium hydroxide has a high enough pH to turn the phenolphthalein a vivid purplish-pink color, thus indicating the presence of water.Paper: Calcium oxide is used to regenerate sodium hydroxide from sodium carbonate in the chemical recovery at Kraft pulp mills.Plaster: There is archeological evidence that Pre-Pottery Neolithic B humans used limestone-based plaster for flooring and other uses.Such Lime-ash floor remained in use until the late nineteenth century.Chemical or power production: Solid sprays or slurries of calcium oxide can be used to remove sulfur dioxide from exhaust streams in a process called flue-gas desulfurization.Mining: Compressed lime cartridges exploit the exothermic properties of quicklime to break rock. A shot hole is drilled into the rock in the usual way and a sealed cartridge of quicklime is placed within and tamped. A quantity of water is then injected into the cartridge and the resulting release of steam, together with the greater volume of the residual hydrated solid, breaks the rock apart. The method does not work if the rock is particularly hard.

PACKAGING DETAILS:Packed in PP bags as 25kg/40kg/50kg/500kg/1000kg or depend on customer requirement

DELIVERY DETAILS:Strictly Deliver the goods in accodance with the contract.

Thank you! Your message has been sent to the following suppliers.